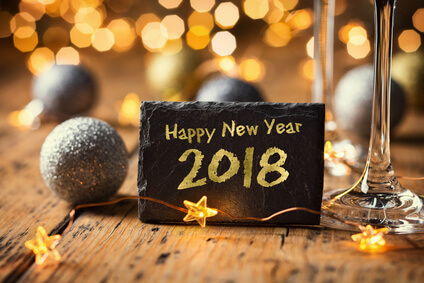 10 Crazy New Year Traditions from Around the World

New Year’s is a time to reflect on the past, and to look forward to a fresh new year in hope and expectation. As the new year dawns, it is a chance to wipe the slate clean and to create new plans and make changes to your life. Of course, we all hope that the new year will bring a change for the better, and around the world people engage in various superstitions in the hope of making this new year a lucky one.

Let’s take a look at some of the craziest new year traditions from all over the world, and perhaps you will be able to adopt one of these to welcome 2018 and make it a lucky year for you!

In SPAIN, the tradition holds that you must eat 12 grapes as the year changes – one for each stroke of the clock at midnight. Do this successfully and you should enjoy a prosperous new year.

Number 7 is often seen as being lucky, and in BRAZIL they certainly believe that this is the case. Jump over the waves seven times – while wearing all-white clothes – and the new year will be a fortunate one for you.

A less common number takes centre-stage in JAPAN, where bells are rung 108 times in Buddhist temples. This number represents the number of human desires, and by tolling the bell to dispel these, you should be able to enjoy a more zen-like new year!

The New Year’s tradition in the PHILIPPINES involves friends and family getting together for a feast called Media Noche. The centrepiece of the meal will be a bowl displaying 12 different types of round fruit, because the shape corresponds to the round shape of coins and thus is a symbol of prosperity.

In many SOUTH AMERICAN countries, the underwear that you choose to wear on New Year’s Eve is said to influence how the following year will play out. Choose carefully, as different colours have different meanings, with red meaning ‘passion’, blue for ‘health’, green for ‘luck’, white for ‘peace’ and yellow for ‘good fortune’. Avoid black, as apparently this colour undergarment will bring bad luck!

COLOMBIANs love to travel, and have adopted a particular superstition as a way to make sure that the upcoming year will be filled with journeys. Simply take your suitcase for a walk around the block at midnight, and adventure-filled voyages await in the new year!

In DENMARK, new year’s celebrations are pretty action-packed. Smashing plates is regarded as a great way to get rid of the old and welcome in the new year. Danes also like to literally jump into next year, standing on chairs and leaping off when the clock strikes midnight.

New Year’s is celebrated in April in THAILAND, but if you happen to be there at that time prepare for some messy celebrations. People smear themselves in grey talc mixed with water, and then a city-wide water fight breaks out as the sins of the past year are washed away.

SIBERIA is a pretty inhospitable part of the world, so perhaps no surprise that they have adopted a rather extreme way to welcome the new year. Experienced divers will cut a hole in an ice lake, and dive to the bottom holding a tree, which they plant to mark the upcoming year. Probably one of the new year traditions best left to the professionals!

The ESTONIAN tradition will be a lot more palatable to most. Estonians will eat a ‘lucky’ number of meals on New Year’s Eve, and as the lucky numbers are 7, 9 or 12, you had best be hungry if you plan on celebrating the new year in Tallinn.

However you plan on spending New Year’s Eve, we hope that 2018 is a lucky one for you. Test your luck on the Euromillions Lottery and maybe you will be starting the new year with a bang!